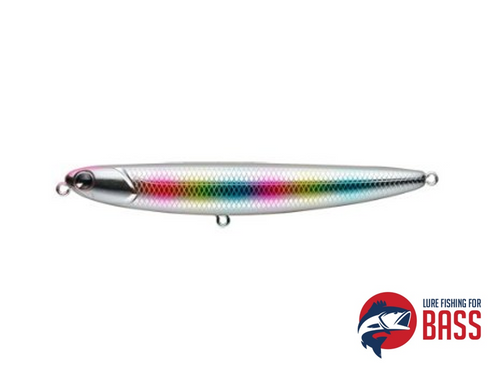 The IMA Salt Skimmer Cotton Candy Silent 13g is for the aficionado who has the confidence to fish a silent surface lure.

What can we say but the hard to find IMA Salt Skimmer is unique among hard plastic topwater stickbaits in that the Skimmer has a slender body that has proven to be one of the most appealing bass lure shapes ever.

IMA pro-staffer Michael Murphy says: "A lot of people put the Skimmer in the category of other walking baits. I think the Skimmer is much different. It's kind of in its own category. It looks like other walking baits, but it doesn't push water, it cuts through the water. To see the design of this bait, the body cross-section is a teardrop shape. And in fact the water will flow over its back and will create a swirl right behind it every time you jerk it, which a lot of baits won't do that. Other walking baits will push water and splash but the Skimmer is one that actually creates a swirl behind it. If you look at the Skimmer on videos or when you are first working it, you'll mistakenly think that fish are swirling at it - and that's what it does, it creates the idea, the impression that there's a fish trying to eat it. So a fish is more likely to become competitive when it thinks another fish is there (but really is not there). So it will see the surface swirl - and try to get the Skimmer before another fish gets it. That's the beauty of this bait - that boil, that swirl behind the Skimmer."