Guest post on using a baitcasting setup when lure fishing for bass by Stephen Lurefishing.

I have used baitcasting reels since the late 1980s. This was a time when I mainly fly fished but I also used the baitcasters when fishing abroad for bigger fish like tarpon. These fish might have blown up fixed spool reels (the basic ones I owned) and fly fishing for larger species was not common back then. The reels have since hidden in the back of a cupboard. Unserviced and uncared for they still function being ABUs that were made in Sweden!

Meanwhile fly fishing somehow gave way to lure fishing for bass with fixed spool set ups but now find myself drawn to baitcasting reels again. This time to cast lighter lures rather than 3oz leads. This form of fishing to me is very similar to fly fishing in many respects and just as exciting! Explaining why it is so good is quite difficult. Despite its popularity elsewhere in the world I am aware of the dismissal most U.K bass lure fishers show to this type of fishing because I thought that way myself. Why make life more complicated? One of my lure fishing pals uses baitcasting gear alongside me and I payed little attention over the years particularly when there were blitzing fish in front of us.

Here I will try to dispel some misunderstandings that I had before I owned and used baitcasting tackle for bass as well as some general observations relating to using it in saltwater. 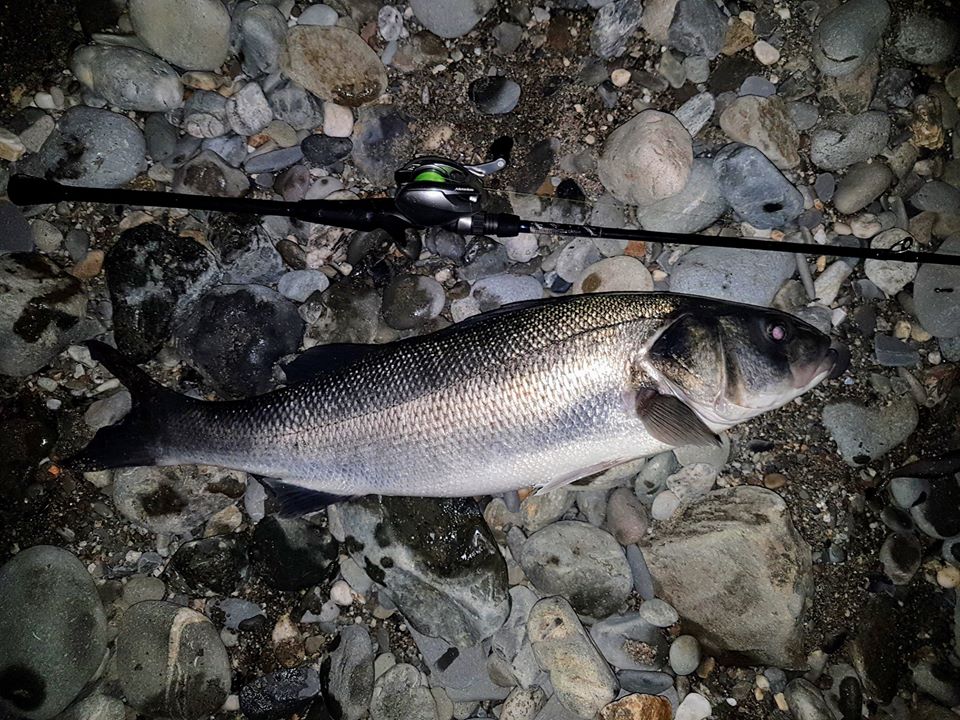 The main differential I feel between fishing with a fixed spool reel (FS) and a baitcasting (BC) one is the directness to the fish and lure. The reel is in your rod hand palm and your thumb is on the line. So when a fish goes, every inch of line is won though direct contact with you. Like with holding line in fly fishing. Rather than with a much more vague contact of a reel knob and probably a dozen inches of handle, gears, shafts and indirect mechanics between you and the feel of the fish with FS. The best analogy that comes to mind is FS being a transit van versus BC being like a sports car where you are 2 inches from the tarmac!

Overall lightness is a difference too. This improves a sense of directness to the fish as well as requiring less effort to fish with. Take, for example, a popular FS rod (5-40g 8ft) weight 190g then add a popular 3500 reel at 389g total 579g or 20.5 oz. The BC tackle above which caught the double figure bass is a rod weighing 114g (10-40g 6ft 10) and reel 175g total 289g. That is 10oz lighter...even holding a 2oz lead in your casting hand along with your normal setup can change beyond acceptability how the rod feels when casting! The same blank built as both types of rod will have different characteristics. The BC version will tend to be stiffer and will handle greater casting weights due to the difference in components and build.

As a further example with regard to how light you can go, the bass (above) was caught with rod and reel totalling 213g for casting weights 5-20g. This set up has landed bass to 7lb. 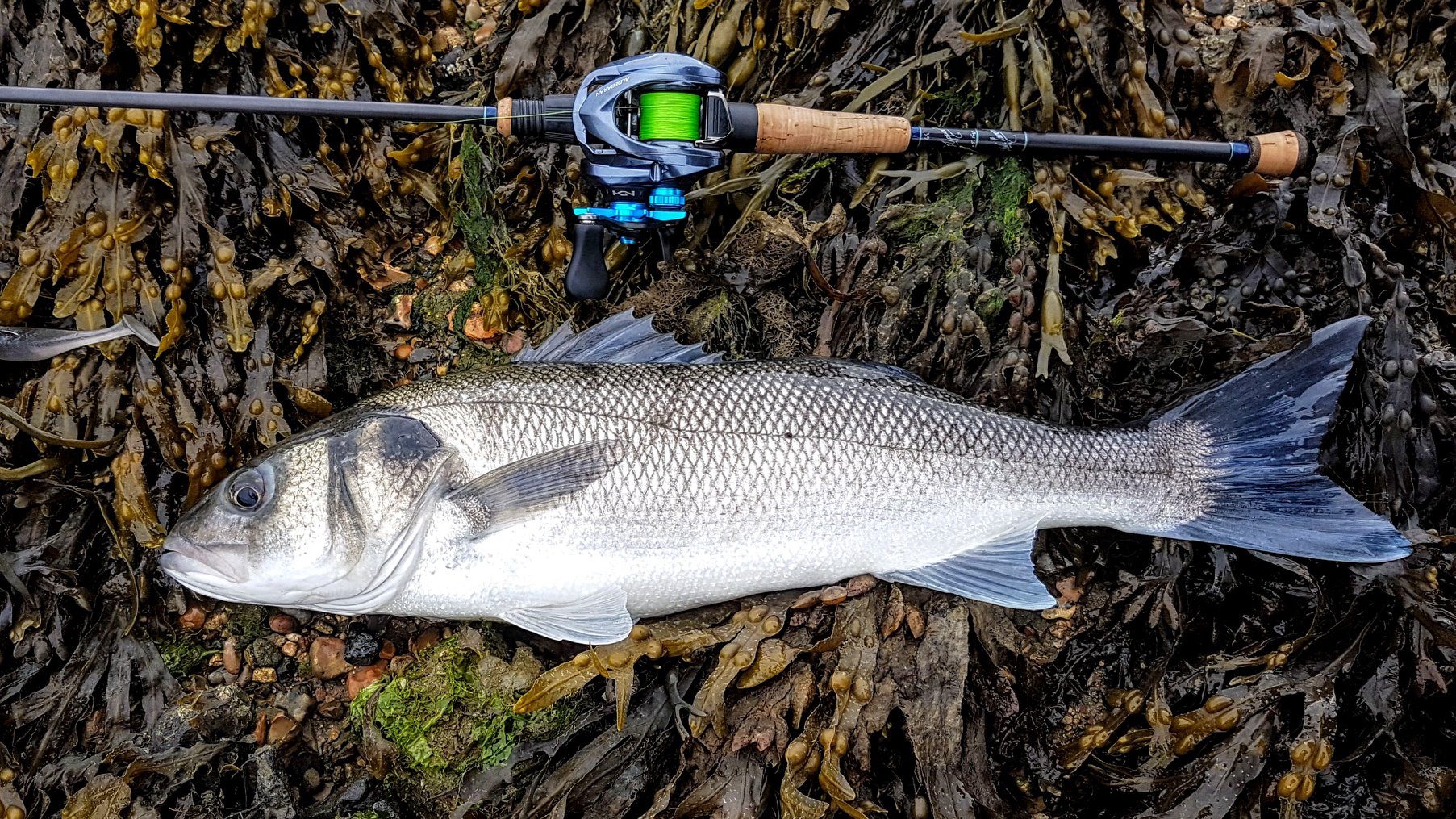 The shorter rod will pull 5lb of force on a fish. If I try to equal that on a longer rod it would require far more effort as it would to cast with it all day.

Casting distance: OK, I am only just about competent when it comes to casting. Testing on a field with a line counter and a FS I have cast 101m with 30g (8ft rod and 2500 reel). This effort was after practice, finger stall and tweaking of gear but was probably an effort akin to Olympic javelin! Not practical for real life. Same testing on a baitcasting setup was 67m but with half the effort. A different pendulum style of casting could go much further but I would probably end up hitting a dog walker as I am not able to do this type of cast yet.

Now after a few double figure bass over the years I have come to realise that the size of bass can be inversely proportional to the distance a lure is chucked. You end up catching them a rod length out! Having said that a brief look at casting records shows how close both methods are. For 18g 120m FS and 116m BC. Above that weight the BC wins. You can watch Japanese anglers (on youtube) casting above 90m with state of the art baitcasting gear and actual lures under an ounce (rather than casting plugs). BC are more accurate and definitely less effort and more fun to cast with, in my opinion!

Some other observations/generalisations about reels...you can use them in saltwater as long as you wash the salt off afterwards and are prepared to do some general maintenance/servicing too. You can even get away with fishing freshwater designed reels made with corrodible magnesium if the protective painted coat is not damaged.

It is a skill that needs practice. Put all known braking systems on full and back them off gradually!

The drag is more stable and generally stronger per weight and size of reel. Line capacities can be greater too. There is a vast range of reels, some casting as little as 1g, some with computer chips (DC) in to do what an experienced thumb learns over time and some specific for bass luring (with braid and long distance casting). Too many variables to list! Then to further complicate things you can tune them to cast further too!

You can cast in the dark once competent and in the surf too. 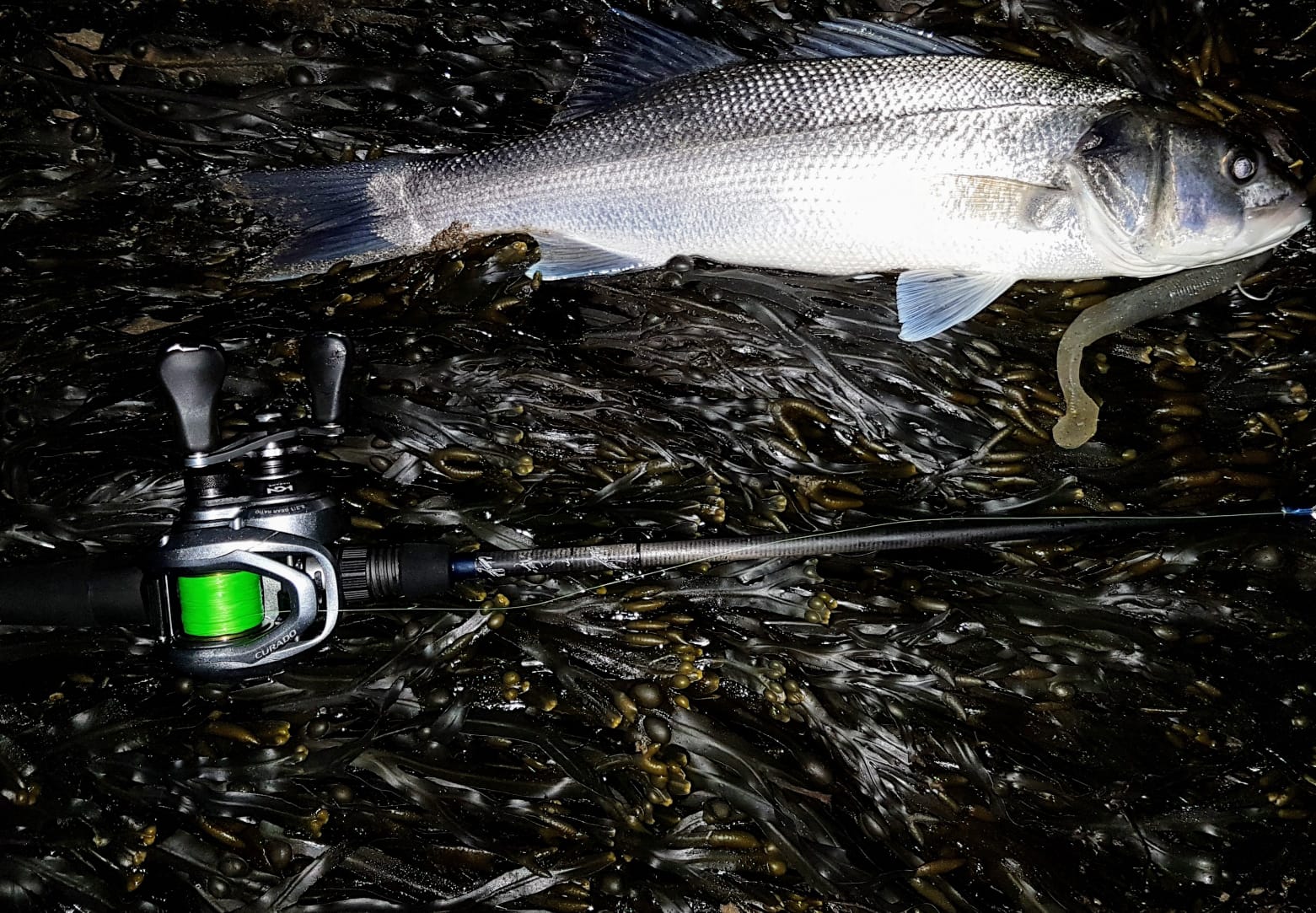 You can use thicker diameter line without it affecting casting distances as much as it does on a FS setup.

No need for baseball caps on backwards, buffs covering faces or colourful sunglasses. You will be cooler by default than your FS casting friends just by fishing with this type of gear. You can enjoy this superior feeling, at least, when no one including you is catching!

Some setups...all caught bass. Some have also had salmon, seatrout, wrasse and pollock! 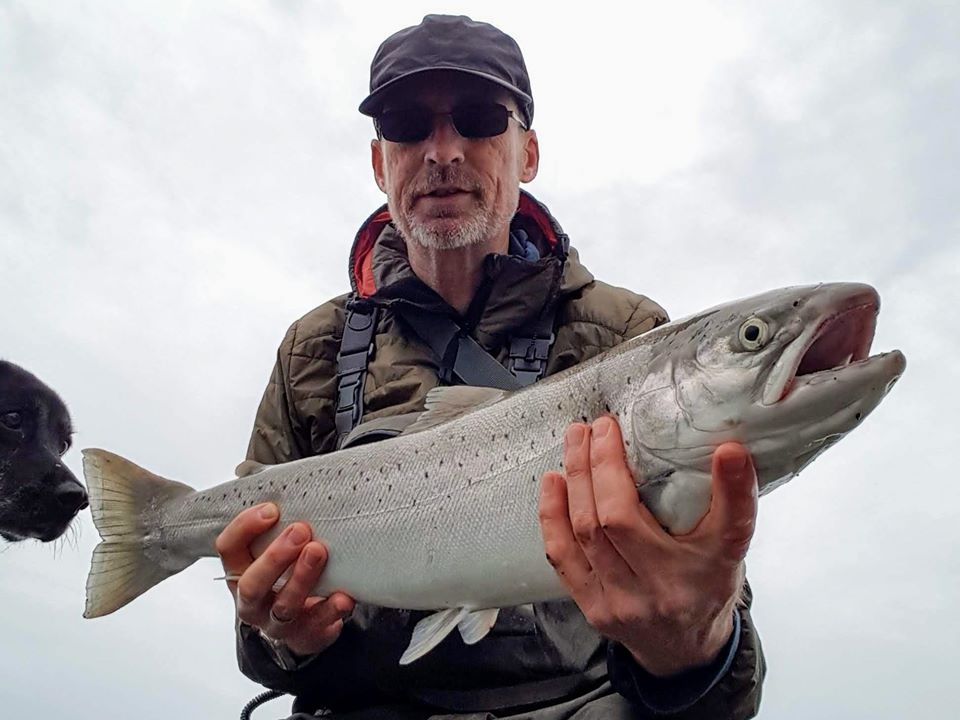 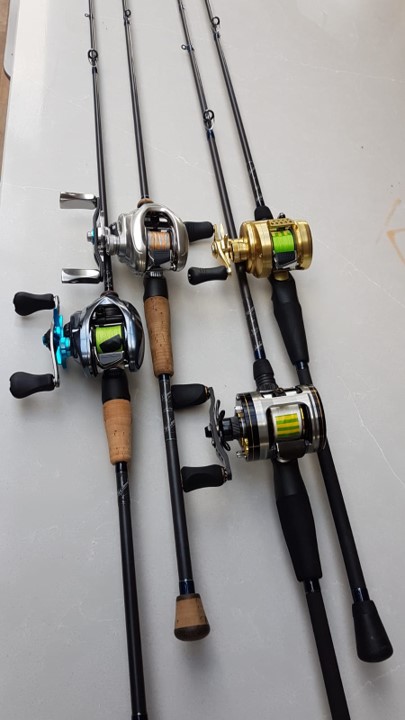