To most lure aficionados, the OSP DoLive Stick Wagasagi requires little introduction. But the recent capture of a bass on one of these incredibly versatile lures has prompted me to describe ‘how’ I tend to go about utilising them over a two part series. But firstly, in case you haven’t heard of the ‘DoLive’ –just what are they?

Available in 4.5” (8g) and 6” (13.6g) guises, they are essentially a soft stick bait boasting an extensive list of attributes. Considering their weight, they cast brilliantly due to their density, and this, coupled with a highly malleable body allows the angler to fish them in the most subtle way possible. Like many top-end soft plastics, a groove on the top and bottom of the lure aids both rigging and the weedless composition - meaning it can be fished through even the snaggiest terrain. Above all though, it is the way the angler can present them in the water that stands them out as something special - these are the methods I utilise with, primarily, the 6” version being the one I turn to.

I am yet to find a soft plastic lure that induces as many ‘hits’ on the drop (when the lure is descending through the water column) as the OSP DoLive Stick - be it when you have paused the retrieve, or straight after the lure has landed on the surface following a cast. Indeed, the relatively graceful ‘plop and soft splash’ that one of these lures creates as it hits the surface may well arouse interest (rather than scare) the bass who will then home in to investigate. The way in which it very naturally, and surprisingly slowly and horizontally plummets, with that seemingly irresistible and very subtle ‘wobble, in conjunction with the tail section delicately quivering is, I believe, a huge part of its attraction to a bass - all the angler needs to do here is sustain contact with the lure rather than too much slack line. My advice is to pre-empt the lure hitting the water by bringing over the bail arm so just before impact so that a tight line can be instantly achieved. 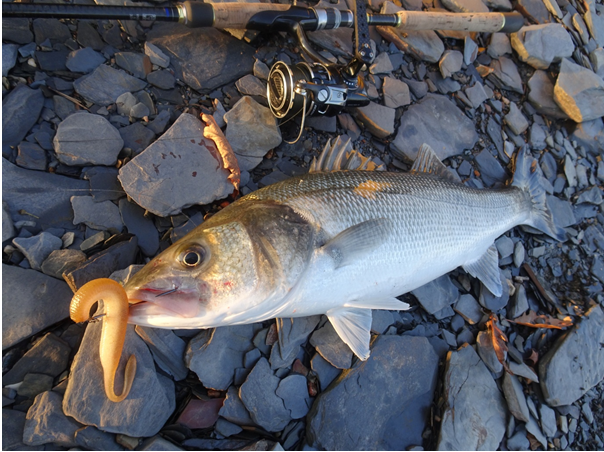 This near 5lb bass nailed the DoLive Stick as it was drifted in the tide, with only the odd twitch and whilst maintaining contact via a slight bow in the line.

Quite what a lure performing in this way represents is open to debate... My thoughts are that it either mimics either a creature that is either wounded and dying (and therefore highly susceptible to attack) or an immature fish obliviously going about its own business and simply swimming downwards. Think about it, how many times have you witnessed small fish (or fry) appearing to drift and/or hold in the current in the relative shelter of a rock, clump of weed or jetty? It is more common to see this behaviour than it is to see them actively and intently swimming against the flow (unless they are being over powered and forced to do so) which leads me onto another method in which they can be presented.

A couple of marks that I fish, and one that is common within most estuaries and tidal lagoons around the UK, are shingle, sand or gravel banks that have been carved out as a ferociously tide ‘rips’ past your boots. In this scenario the DoLive Stick is effectively ‘dead-drifted’ so that it can search out various depths or indeed certain features such as depressions, channels, patches of rocks, mussel beds, etc. Admittedly, although I have limited personal experience of this method, over the past six months it has been a tactic that I have employed with consistent success - even over the winter months.