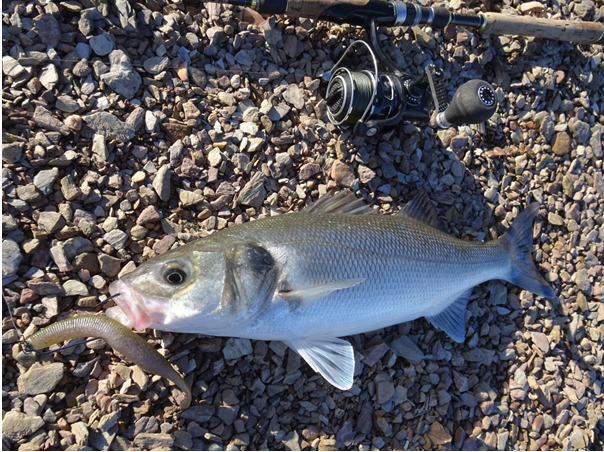 Part 1 of this series I described what the OSP DoLive Stick is and what its attributes are, in addition to two ways in which I have successfully utilised or ‘fished’ them. In Part 2, I will supplement this information with three further retrieve styles that have also proved to be productive for my clients and I.

In relation to weedless, weightless soft plastics, one of the biggest mistakes an angler new to lure fishing for bass often makes is retrieving them too quickly. Now, as you’ll read later in this post, sometimes that is an extremely useful and effective method, however, in certain situations it can pay to be exceptionally stealthy in your approach – initially at least. I’ve written many times about how under bright skies and calm, clear seas I will seek out those difficult to access and frightfully snag-ridden venues, and then utilise the most subtle and ‘life-like’ lure I have in my box, which, more often than not is the Fish Arrow Flash or the DoLive Stick.

Rewind to Part 1 and remember the way that small or immature fish behave when not being harassed – they don’t appear to be doing very much at all. But when they do move it is very often by turning ninety degrees in a relatively quick motion – something that can be replicated beautifully with one of these versatile soft plastics by administering a ‘twitch’ to what needs to be an excruciatingly slow retrieve. When I say ‘slow’ I mean one full turn of the reel’s handle every two to four seconds, depending of course, on the retrieve ratio of the model you are using and the size of the spool. Further, if the ratio is high (say above 6.0:1) and the spool size around the 4000 size, then this may need to be even slower. Remember, a slight bow in the line is ideal and will actually aid natural presentation.

Above is the type of rugged ground that is full of life (bass food) and that lends itself well to the use of weedless, weightless soft plastics. Here, I would commence a session with a very slow/twitch retrieve style.

As I’ve already alluded to, in complete contrast to the above method, there are also occasions when a lure fished very quickly, or to be more precise, in rapid bursts, that can provoke a vicious bass attack. A ploy that I’ve utilised over the past two seasons, and in similar sea and weather conditions to those described above, is to allow the lure to ‘wobble’ all the way down to the seabed and then allow it to drift with the current or remain stationary for up to ten seconds (if there is no wave action or tide to affect it). Then, I will twitch the lure into life via a vigorous lifting of the rod tip before retrieving quickly (two to three turns of the handle per second this time) for around ten to fifteen turns, before stopping completely, and letting the lure sink back to the seabed again whilst maintaining that all important contact.

A small bass that snatched the OSP DoLive Stick as it was very quickly retrieved off of the seabed – a useful tactic if you suspect the fish are there, but just being cautious or lazy!

What I think this represents is a small fish darting out of cover which, in turn, will alert the bass to its presence. In the same way that bass are generally more positive in regards to hitting a lure in rough or murkier seas, I believe that the shorter timeframe in which the bass has to make up its mind (as to whether what is attached to your line is real or not) means that when it glimpses this movement it reacts. I strongly suspect that many bass I’ve caught in this way may have ignored the same lure that has been drifted or retrieved very slowly over its head continuously on previous casts... Moreover, I have found that a seabed consisting of sand or shingle interspersed with clumps of weed as being more conducive to this approach.